Part 1:  Published in the July Edition of The Link

The first occupants of the land on which St. Andrew’s stands

I have relied on an extensive and comprehensive report “Aboriginal history along the Cooks River” published by the Cooks River Alliance and the Australian Government. http://cooksriver.org.au/publications/aboriginal-history-along-cooks-river/

In the report, the Aboriginal name for Cooks River is said to be not known but elsewhere, https://dictionaryofsydney.org/entry/boatswain_maroot#ref-uuid=d019eb08-9e65-9034-55cc-52308f00b997 it is said to be “Gumannan”.   I will use our modern names for ease of our understanding.  While St. Andrew’s may seem a little distance from Cooks River, this is a comprehensive document plus, Cooks River is not what it was and I am not talking about the mouth being moved to build the airport.  20,000 years ago, Botany Bay did not exist.  What we call Cook’s River was 4 km longer than it is now and flowed along the line of Lady Robinson’s Beach and joined the Georges River at, what is now, Greenhills Beach and then joined the Hacking River off Jibbon Head to meet the sea about 1.5 km later.  It seems that both Cooks River and Georges River have lost the apostrophe that they, presumably, once had.

Map modified from “Aboriginal history along the Cooks River”. 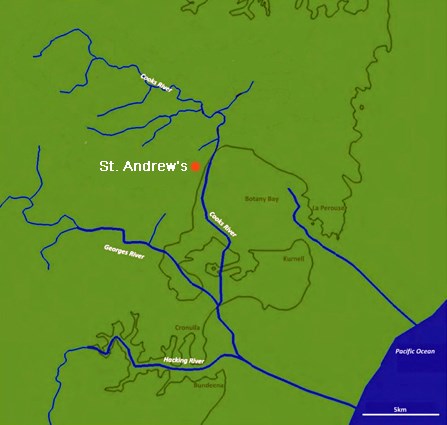 So that would make St. Andrew’s definitely part of the Cooks River valley.  Muddy Creek, the lowest tributary of Cooks River on this map, now runs past Rockdale Plaza and crosses West Botany Street between Bay and Bestic Streets as a concrete-lined stormwater drain, becoming a creek after crossing Bestic Street by Francis Avenue.

So, the report is applicable to the land on which St. Andrew’s stands.

This is a very much abridged abstract of the, 45-page, full report.  I will place a full copy of the report at St. Andrew’s.

20,000 years ago, the world was in the middle of the last ice age, sea levels were lower and there had already been aboriginal people in the region for thousands of years.  The river at Wolli Creek was freshwater where now it is brackish.  A fireplace dating back 10,500 years has been found next to Tempe House.  Around that time the coastal swamps extended all the way to Moore Park and Randwick and 8,500-year-old stone hearths have been found in Randwick.  The remains of a butchered dugong dating back about 6,000 years were found when the Alexandra Canal (by QANTAS Drive) north of the airport was excavated.  Kendrick Park, Tempe, has a shell midden dating to about 4,500 years ago and there are middens and rock drawings in Undercliffe.  4,000 years ago, stone axes were being used and about 1,000 years ago fish hooks were in use.

This all begs the question as to who should be acknowledged in our respects to the traditional owners of the land on which St Andrew’s stands.  The land on the northern side of Cooks River is identified in Figure 3 as Cadigal land (also spelled “Gadigal”) and the land by the coast south of Cooks River is Gameygal (also spelled Kameygal) land.  They are defined as “Aboriginal clan whose hunted and fished in the area along the Georges River and western Botany Bay.”  Gameygal land extended to include Allawah, Carrs Park and Blakehurst.

Cadigal/Gadigal: Aboriginal clan originally found on the southern shore of Sydney Harbour from inner South Head, along the shores of the present Eastern Suburbs to Darling Harbour.

Gameygal/Kameygal:  Aboriginal clan whose hunted and fished in the area along the Georges River and western Botany Bay.

Eora: Group of Indigenous clans from the Sydney basin that were united be common language and strong ties of kinship. As coastal dwellers they were skilled at navigation and fishing and had strong spiritual ties to the land, which were broken with the arrival of Europeans. The name is Aboriginal for 'the people'.  https://dictionaryofsydney.org/organisation/eora_people

Dharug: Aboriginal nation composed of many clans across a wide geographical area of the Cumberland Plain. https://dictionaryofsydney.org/organisation/dharug_people

So, as far as I can see, the original custodians of the land should be referred to as the Gameygal or Kameygal people of the Eora nation.  I will look some more expert validation of this.